Love, in its modern version, gives us the impression that...

Love … So many problems, questions, questioning, doubts, and tears!

No, what is crazy with love in its modern version is that it gives us the impression of being interchangeable, of being without interest, of being “disposable”.

And I find that there is nothing sadder. It is this thought that breaks my heart, more than my failed love experiences.

It is for this reason that it breaks our hearts, even if we were not really in love.

It is the terrible fear of meeting someone, of hearing them say that they like them, of seeing them throw us away as if nothing had ever existed, then of replacing us with disconcerting ease.

It’s that overwhelming feeling of realizing that in fact, we were nothing special. It is this tenuous and tenacious impression of insecurity that prevents us from falling asleep at night.

And that distorts and distorts our vision of love.

Because whatever your courage, whatever your self-confidence, you will wonder why he chose not to give you a chance. Why did he suddenly change his mind? What repelled him? Why did he decide to give up?

And even when an ending worthy of the name is offered to us, it is difficult to recover. It doesn’t help much. Because most of the time, it’s just a heap of lies meant to make us feel better. It is hardly sincere and often, there is not an ounce of truth in these words which constitute the only goodbye which one will never have.

Because no one will ever tell you that it is your fault and that you are responsible for this failure. No one will ever openly say to you, “You are not the woman of my life”.

But it does not change anything. They didn’t choose you. They don’t want to be with you. They will not tell you that they want to know you, because you would have to be silly not to want to.

They are not afraid of losing you. They laid eyes on you one last time and said that you were replaceable. They will quickly and easily forget you and replace you with someone else.

And I think that’s why meeting someone today is so difficult. I think that’s why millennials find it so hard to find (sincere) love. Perhaps that is also why they are content with wobbly or mediocre relationships, which always seem preferable to emptiness, to nothing.

They prefer the minimum and the little to total loneliness.

No one wants to be replaceable. Nobody wants to tell themselves that they are not up to the task. And even if you learn to live like that, it’s not healthy. It is not the right path. It is a path which, in the long term, can only be painful.

It is not what you are. You deserve so much better … Because even if you accept such a life, seeing your replacement take your place would be just as painful. Seeing someone else living your dreams for you would hurt you just as much.

The only thing that keeps us going is the hope of one-day meeting someone who thinks we are irreplaceable. The hope that one day we will meet someone who will prove to us every day that we are special.

One day we will meet someone who will be like a refuge and in whose eyes we will be theirs. 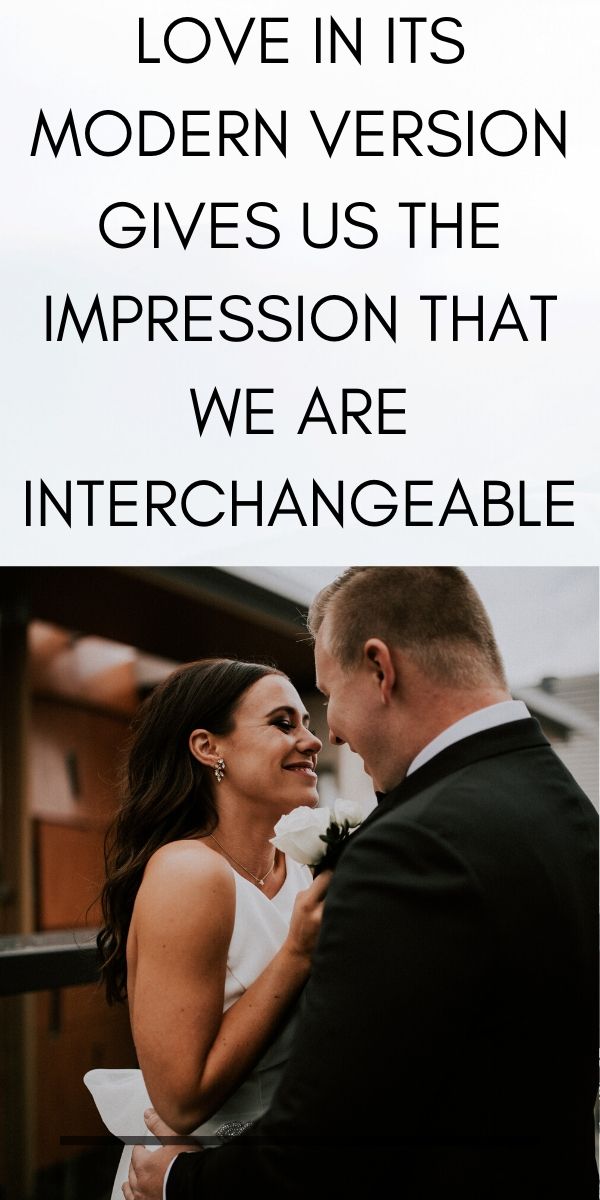