I knew right away that he was “the right one”...

After being friends for a while, my husband and I started dating about six years ago. It didn’t take me long to realize that he was the one for me. In case you’re wondering what made me understand this, it’s because he did the following 11 things.

1. He really made an effort to get to know me.

Before we started dating, we were good friends first. Often times we just hung out together or texted all day. When I wanted to go to the fun fair, it was perfectly natural to invite him, and he sometimes asked me to join him and his friends when they were hanging out together. I knew he cared about me because he got to know my personality and he just wanted to be near me.

2. He planned our first date.

When he picked me up from the house, there was a gift waiting for me in the passenger seat of his truck. He knew I loved the Lion King and, huddled in a small red box, there was a little stuffed lion and flowers. Unlike my former boyfriends who never came to pick me up to take me to a real date, it was refreshing to have a gift and a driver one evening when he had taken the time to plan our evening together .

3. He had very good manners.

I was surprised on our first date when he got out of his truck to walk towards me and open my door for me. What was even more surprising was the first time he pulled my chair for me on my birthday. When he slid the chair under the table as I approached and pulled away while waiting for me to sit down, I watched in amazement until he shrugged and sat down in the adjacent chair. I never thought a guy would do this for me.

4. He waited for our first date to kiss me.

He had a lot of opportunities to do it and there were many times when I could see that he wanted to kiss me. After I started hanging out with him, I asked him about it and he shrugged and said, “I wanted to be a gentleman and wait until I can have a date with you” . It was so s exy!

5. He was spontaneously romantic.

Between the stop of his truck on the side of the road because he wanted to kiss me or when he stopped to pick flowers in a field full of yellow flowers, he always made small gentle gestures to show me that he cared about me. Sumptuous gifts are frivolous and have been offered to spoiled girls since time immemorial. It is these little actions that a man does that really show that you are in his heart and in his mind.

6. He spoke openly about the future and what we would become.

I never needed to ask him where we were going or what he thought of our relationship. After he said those special words, everything he envisioned for us was on the table. He told me that he wanted children and a family and that he knew it was me he wanted to marry. Even though we decided not to get engaged for a few years, I always knew where I was with him.

7. Talking to her seemed natural.

With my old boyfriends, I always had the impression of pretending to be someone I was not. I shaped myself to be what they wanted and I was constantly wondering if I was doing or saying something stupid. I knew I had to keep it because I was free to be myself and being around it seemed as natural as being around my best friend.

8. There have never been any games.

My past relationships were a minefield of unanswered texting and competing with other girls for attention. With him, I never felt like I had to jump through hoops to get what I wanted and I have always been his priority.

9. I had no feeling of impending disaster.

Most of the time, I felt like it wouldn’t work with my old boyfriends, even if I tried to convince myself otherwise. I had an intuition with him, but it was positive.

We started dating six months before I left for college and he was unable to move with me. While our relationship was still fresh, we already felt committed to each other and he agreed to have a girlfriend from a distance until we could move in together.

11. There was always a climate of trust.

To come back to the feeling I had about our relationship. I felt that he was a trustworthy person and he never gave me reason to doubt him. I already knew him as a friend and someone I could count on, no matter what. Even when we were away for about two years, I was never afraid that he would cheat on me because I knew he was a man of integrity. Believe me, this is the kind of man you want to catch and you will never let go. 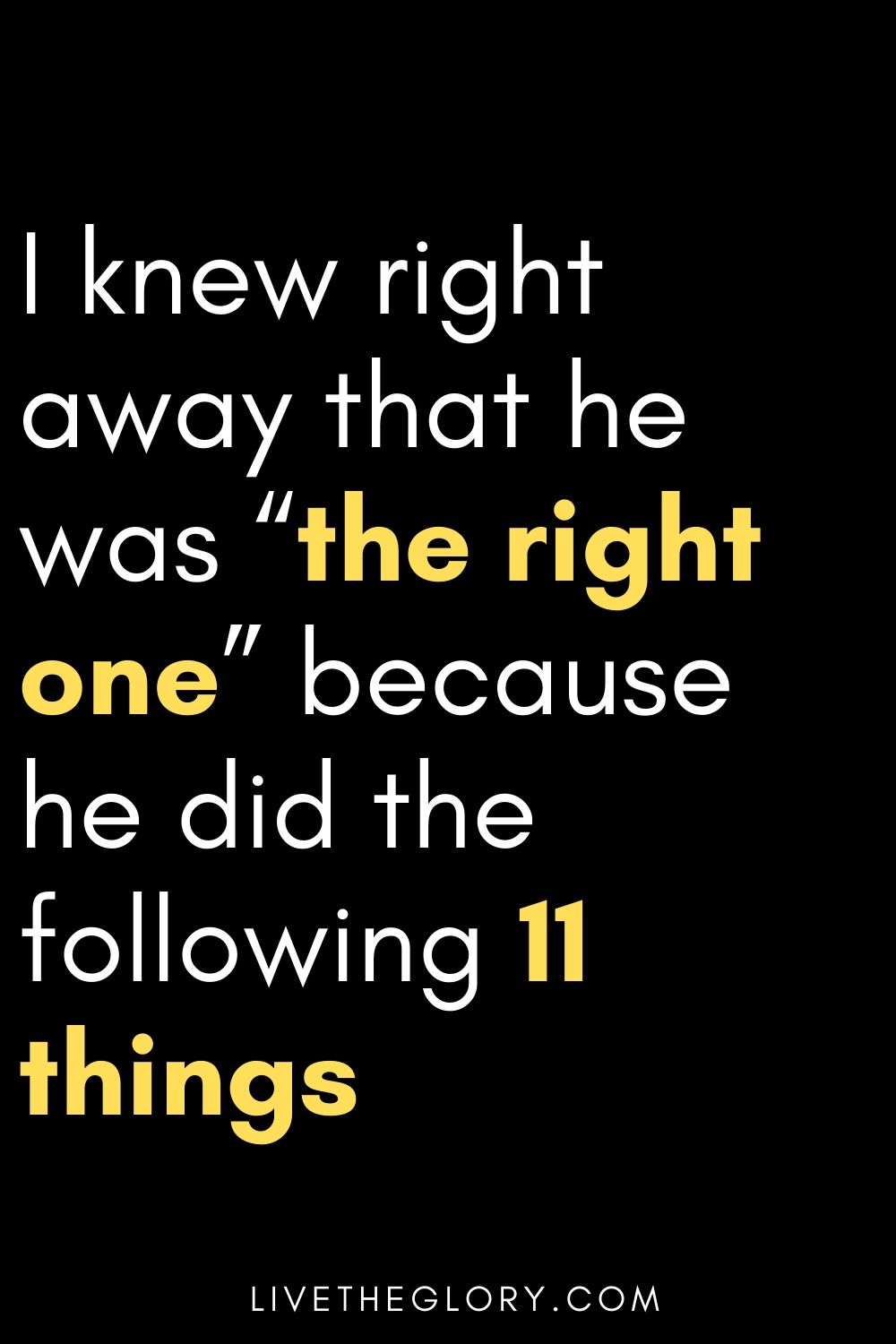