How do I know if he loves me without asking...

Nothing is more frustrating than not knowing if your lover loves you. This incessant questioning gives way to all meaningless procrastination! This is why I am going to give you the secrets in order to answer your question: how to know if he loves me without asking him?

Remember that we do not show our love in the same way, according to people, according to men, according to women … Besides, it is the object of many conflicts in the couple because we do not understand each other not and we end up getting lost . However, it suffices to open our eyes and ignore our fears to give free rein to our emotions. In this article, I will show you that your man gives you signs of his love. No need to ask him to do it because his actions are already present, you just have to know where and how to look.

How do I know if he loves me without asking him?

1. He shows you his weaknesses

A man does not show his vulnerabilities easily. Even if we are told long and wide and across about equality between men and women, the fundamentals remain: a man likes (in the majority of cases) to show that he is strong and that he manages the situation. In each of them is a little boy who needs to be comforted to feel stronger and more armed to face reality. If he shares his fears and doubts with you, know that it is a mark of love! It is revealed and laid bare in front of you! It is a gift that must be appreciated at its true value. If you are wondering: how can I know if he loves me without asking him? Know that a man who lowers his guard is a man who takes the risk of being vulnerable in front of the woman he loves.

2. You shine in his eyes

A man in love will find the woman of “his life” pretty every day of the year. It doesn’t matter if you are wearing make-up, dressed, dressed, or dressed in an old pilou-pilou jogging! So don’t worry to understand why he finds you attractive when you are ugly: accept the gift he offers you! It’s his way of saying “I love you”. Ladies, take this compliment as a declaration of love and do not seek to refute, contradict, or argue the words of Monsieur.

A man in love wants his sweetheart to be the happiest and most fulfilled. He will be ready to take his leave if you need to go to IKEA and take advantage of his big arms. Your lover will find the only pharmacy open on Sundays if you have a headache. If you are wondering: how can I know if he loves me without asking him? Know that a man in love will pass in the background for his beautiful. It is also his way of saying “I love you”.

4. He listens to you

Women have a much easier time listening. If your man makes an effort in this direction it is because he loves you. In general, the male gender tries to find solutions to help others and not listen out of pure altruism. If he does that, it is because he says to you, in other words “I love you”.

Men are not the type to enter a conflict. If he takes the time to defend yourself, it is because he loves you. Otherwise, he will not take the time to respond or argue to put you forward. If he defends you it is because he takes the risk of the person making him up arguments against you. If you are wondering: how can I know if he loves me without asking him? Know that defending your sweetheart proves that he loves you.

6. He accepts those around you

A man who loves you will make the effort to get along with those around you. It is essential so that a couple can function serenely. Otherwise, the network of one or the other will play against the couple. If he disagrees with your loved ones but remains polite, it is a real sign of respect towards you.

7. You are his pride

A man who loves, is proud of his sweetheart! He tends to proclaim it loud and clear to anyone who wants to hear it. He will speak about you, put you forward and make the whole world want to love you. A proud man is a man who loves!

You will understand that your man does not have to tell you all the time “I love you”. He tries to prove it to you with 1001 gestures and behaviors. Know how to watch, listen, and translate his intentions to welcome and cherish him as he deserves. Love is not just words, but also and above all proofs of love.

If you are wondering: how can I know if he loves me without asking him? I invite you to watch what he does or how he behaves. You will quickly realize that he cherishes you and that you are the woman of his life. 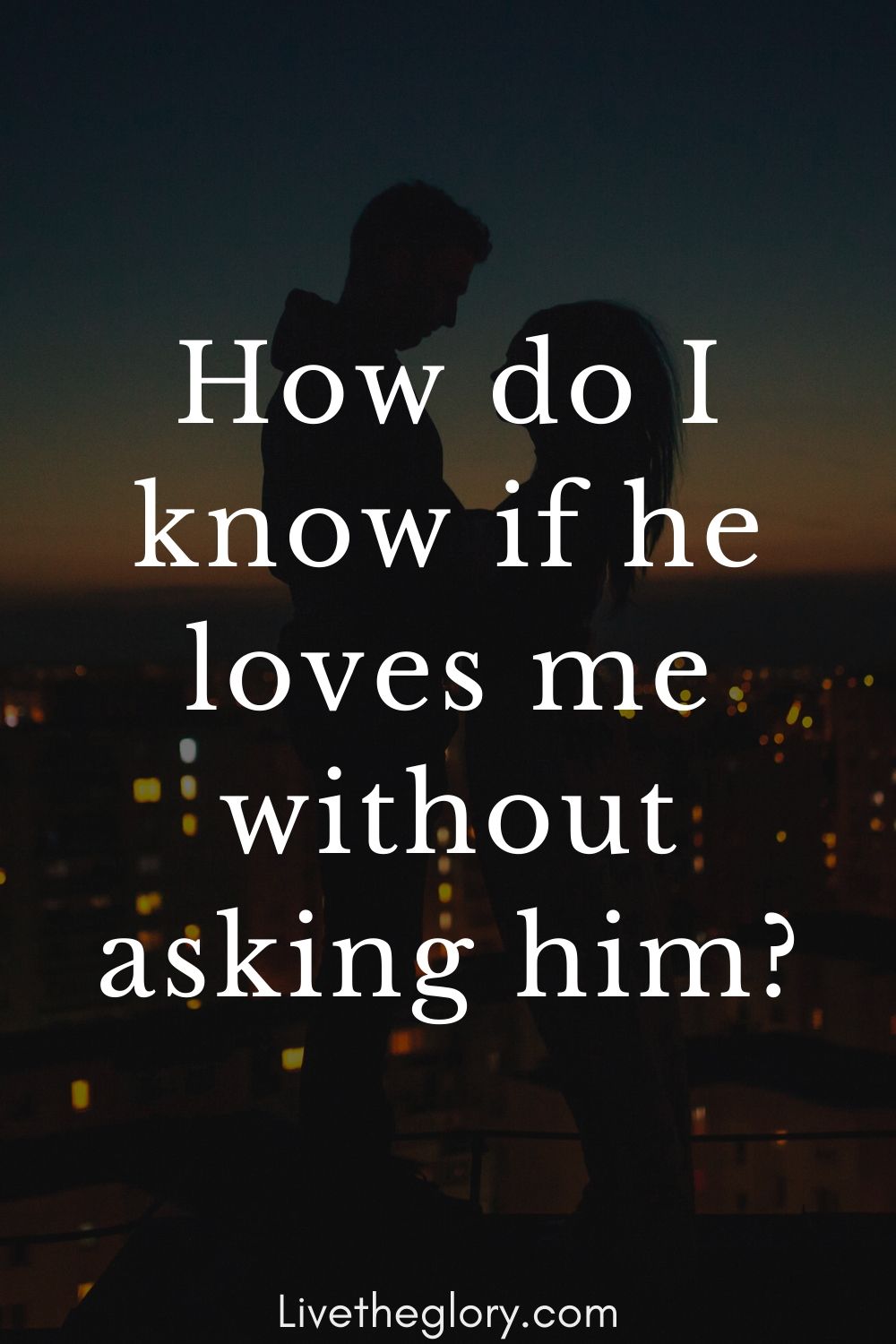