By what emotional bias does he show you his love...

He tells you that he loves you but not the way you think.

Someone can tell you that they love you all day long, but you can’t believe it.

It is not really that we need evidence but rather that we want something that reinforces the words.

Fortunately, there are a thousand ways in which someone can tell you that they love you, and the best way to show their love is to do so through intangible gestures and emotional bias.

If your partner swears that he loves you but refuses to pick you up from the airport or pick up your clothes from the dry cleaners, you can easily think that his actions do not follow his words.

You have probably heard the following expression, in one form or another, “don’t make promises you can’t keep”.

This means that many people say things – promises, speeches or threats – that they will be unable to fulfill. And it also works with love.

We can say a lot of things that we do not mean with words, but if we are unable to prove it by our actions, that means absolutely nothing.

And to prove it, we can use acts or our emotions. If you don’t really mean what you say, you’re just lying.

But the problem is, it can be difficult to understand someone else’s “emotional vocabulary”.

Perhaps you do not realize that for your partner, buying your tampons is an important gesture and it is also his way of telling you how much he loves you.

And as in any type of communication, everyone has their own language and interpreting these emotional gestures can, therefore, be a real challenge.

Once again, astrology is there to help us understand that love is not always expressed through great gestures and spectacular prowess. Sometimes it’s the simple, emotional things like being present that are the most sincere ways of saying “I love you”.

Here are the emotional biases by which he shows you his love, according to his astrological sign.

An Aries man emotionally demonstrates his love by being the most fervent supporter of his partner.

He loves your competitiveness and even when you beat him in any game or sport, he is happy to see you win.

A Taurus man emotionally demonstrates his love by being the shield and champion of his partner.

His support will be unwavering.

When a Gemini disagrees with his partner, he has the ability to see things from his point of view and he will sometimes even change his mind.

When his partner has had a zero-day, a Cancer man will try to free her from her frustration by taking her on her shoulders.

He will remain calm and calm and let her discharge on him. It is one of their most beautiful ways of expressing their love.

A Leo shows his love by ensuring that his other half knows how much he is appreciated, desired and loved.

He will be extremely proud to present it to his friends, family or colleagues.

A Virgo man does not show his love only by offering his advice, but also by following those given to him by his beloved.

A Libra man shows his love by staying in touch.

He doesn’t need a reason to call or write to you, he just wants to say hello and know how you’re going.

A Scorpio man shows his love by asking, “What can I do to improve myself?” ”

It is a sign of his desire to improve for his partner and the fact that he trusts him enough to show him his vulnerability.

A Sagittarius man tells his partner that he loves her by planning a surprise trip to a place where she has always wanted to go, even if it was not for him, the dream destination.

A Capricorn man shows his love by offering his partner this thing of which she has dreamed (not entirely in secret) for so long, like a gift card in a spa.

Or, he’ll put together a playlist of his favorite music and download it to his phone.

An Aquarian man tells his partner that he loves him by working for a charity that is close to his heart or by giving money on his behalf.

A Pisces man shows his love by asking you how your day went before talking about his own.

What is more, he will actually listen to you tell what you are going to tell. 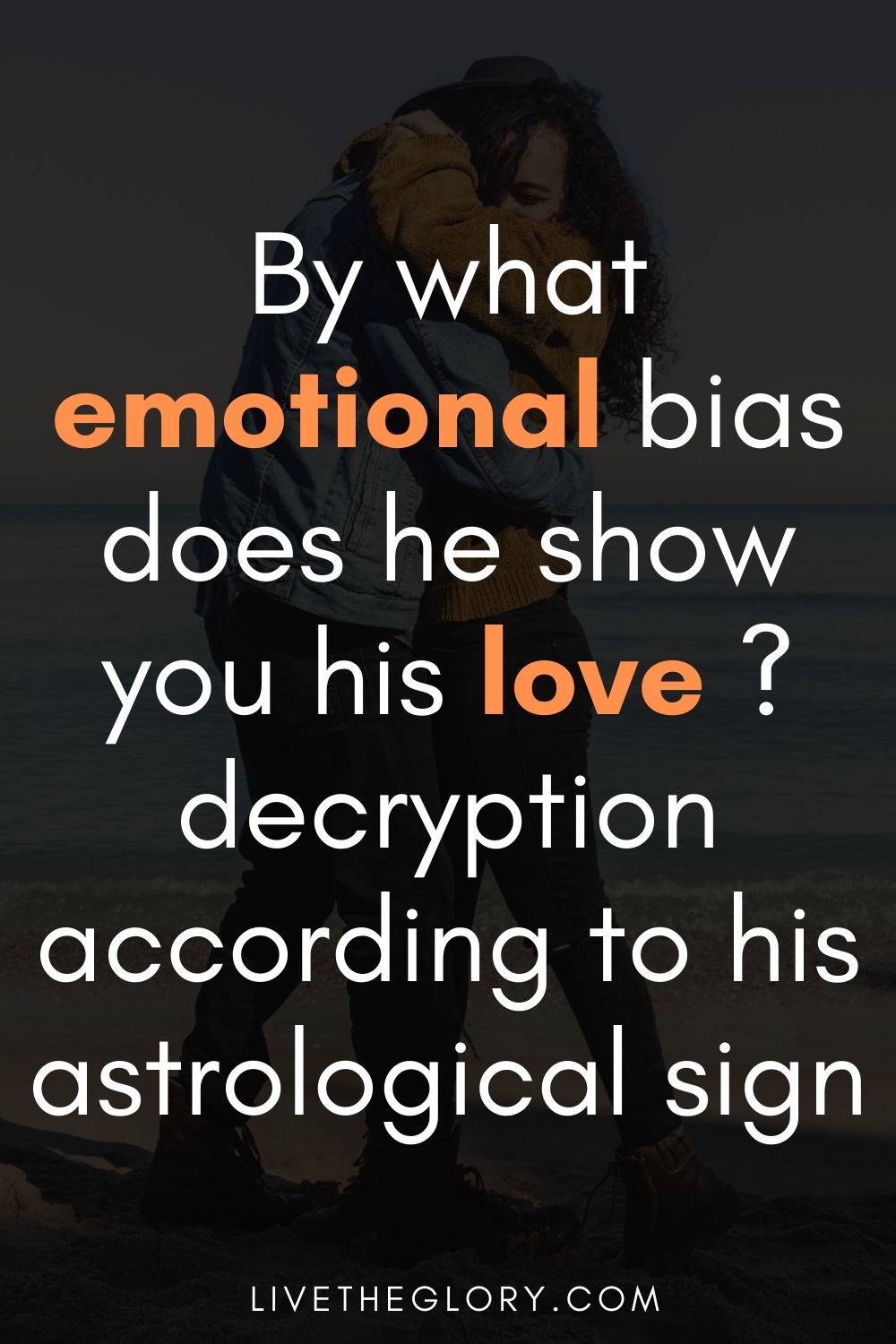