5 feminine traits with which men systematically fall in love!

“It is easy to fall in love. Constantly falling in love with the same person is extraordinary. “

Aspasia is a famous woman in Greek history who lived in the 5th century. She was known not only for her charms, but also for her beautiful and sharp mind. More than that, her life gives us a glimpse into the lives of women in ancient Greece.

Originally from Miletus (today, Turkey), she arrived in Athens and became a courtesan for influential figures like Pericles, who was very well known at the time.

Aspasia quickly made a name for herself and met the cream of the crop of Greek society. Politicians, philosophers, high-ranking people – and of course, men lost in love – naturally gravitated around her.

Few could resist the beauty of Aspasia and her legendary talent for deep conversations. Plato even mentioned it more than once in his writings – and it is not nothing! Some scholars even claim that one of his fictional characters is inspired by Aspasia.

To sum up, more than a thousand years later, people are still talking about her. No one has this kind of historical impact without a certain power of seduction. This natural ability to attract men is powerful because it goes beyond cultures, beliefs or values. It would almost be an unfair advantage.

Basically, having the RIGHT TRAITS gives you the power to penetrate the mind of a man … And to activate his unconscious switches to make him understand how attractive you are.

These switches have been there from the start. They are in the same category as those who tell a man when to eat, sleep, fight or flee. In other words, they are PRIMITIVE.

Once you’ve started these instincts, he can’t help but be drawn to you inexorably. These signals of attraction transcend history and have survived the test of time.

But enough said, let’s get to the point…

Here are the 5 main traits that will make him fall in love with you (again and again):

When we talk about instinct, it’s not just looking for food or fighting wild animals. Part of our brain is for perceiving status – and s**xual attraction has a lot in common with that.

It goes back to ancient times, and being part of a group brings a certain status. Someone who has more “social currency” than others, therefore, brings a specific psychological response associated with joy.

Be careful, it’s not just about money – even if it has a little to do with it.

Higher status implied other subliminal signals like hygiene, intelligence, emotional maturity, etc. These are signals that somehow indicated to men that they were facing an alpha female.

Aspasia moved with grace, eloquence, and dignity. She was not of noble birth, but she still came to the top thanks to all these traits. Even if she had her share of haters, the criticism went to her head. Women also assess potential partners in this way.

Male traits such as strength, sense of direction, and protective instinct attract women to a primitive level. It also goes back to the time of tribal societies. Traditionally, women had to depend on the father figure to be protected from immediate threats like hunger or bandits.

It is obvious that a LOT of things have changed since then and that this model no longer really applies. But our evolving brains tell us the opposite. Deep down, part of us always needs to check this list before giving someone the green light.

That said, if you can cultivate a personality built on feminine strength, flirting and a good dose of class…

… Then you will have no trouble getting a bunch of guys fighting for you.

It is not easy to let a man see your softer, more sensitive face. It may seem like a real wasp when you are with someone you don’t know very well yet.

But building a deeper connection with a man partly involves sharing things that you wouldn’t tell anyone else.

Of course, I’m not saying that you should tell your whole life and expose your soul on the first date. (Believe me, this is the kind of thing that will make him take the excuse of going to the bathroom … to run out the window better.)

What I mean is that when you try to develop an emotional bond with a man, you can slowly, slowly, reveal the deeper layers that make up you. Over time, you can start sharing your biggest fears, the people you admire as a child, or the kind of life you would like to have in ten years.

If you feel like he’s joining you in there …

… And, more importantly, that he WON the right to see that part of you…

… So don’t be afraid to open yourself up to him.

Find the right time, and it will be honored that you have given him this privilege.

Men desperately need to feel accepted, and if you take the first step in opening yourself up to him, he will want to do the same.

# 3. Let him rejoice in your femininity

When you hear the word “feminine”, you might think of qualities like wearing floral dresses, speaking in a high voice, pouring out on the last episode of “Real Housewives of Beverly Hills” or acting in a manner … ” girly “.

But the true essence of this trait goes further than the superficial or the stereotypes.

To be a woman in the eyes of a man is to have a nuanced combination of qualities.

We’ve already talked about the importance of being emotionally open, but there are still a few things you should know. For example, let’s go back for a moment to what I said about the protective instinct of men.

Nowadays, a man doesn’t really need to worry about preventing a lion from devouring his wife and children, but this state of mind exists in a different form.

Men always take pleasure in being able to take care of their loved ones. He gets a sense of accomplishment, which comes from the deepest part of his masculinity.

If you add to that your own feminine need for a man who “takes care of you”, he will be more than happy to play this role. I am telling you this while knowing full well that you do not need a man to carry out your projects.

But I also tell you this: if you offer him the privilege to do it anyway …

… It will encourage him to do what a man does for his partner.

And of course, all of this holds true for a healthy, emotionally balanced relationship.

And I’m pretty sure that’s what you want.

Here’s another feminine quality: being in tune with your needs and cultivating your spirit.

I can already hear women saying “What about me?” Me too I have needs… and there is no question that I am the babysitter of a man-child with an Oedipus problem! “

Again, if you want a balanced and functional relationship (as it should be), you need to understand what men expect from their partner.

Many men orient their lives to achieve goals and produce results. From a man’s point of view, his manhood is at stake as soon as he is let loose in this hostile world. So at the end of the day, he wants nothing more than a loving partner to support him. He needs a woman who can help him release the emotions he doesn’t understand himself.

Above all, he needs a woman who WILL ACCEPT him with his faults.

If you can put your feminine energy into the equation and care for it that way, you will have a dedicated partner FOR LIFE.

There are other feminine qualities that attract men, of course, but these two tend to be at the top of their list.

Here is the last and most important…

I had a cat named Arlene (praised for her hairy little soul), and she had a toy in the shape of a mouse that squeaked when she “killed” her.

The funny thing was that she quickly lost interest after doing it a few times. In her head, she had already satisfied her hunting instinct, so the mouse didn’t have much new.

Likewise, men have fun chasing after their partner. It is their caveman brain in a social game, which constantly wants to “dominate” its prey.

I know it doesn’t really sound romantic, but don’t take it literally.

It is a symbolic need that men have, and it manifests itself in different ways. For example, have you ever noticed that a man gets more and more excited when you give him “trouble”?

You can do this in different types of situations, for example by taunting him a bit after winning a video game or Monopoly…

… By flirting heavily with him in a very public place…

… Making little jokes between you…

… Or having a humorous conversation about what you disagree on.

These are all the little ways that men “test” their partner.

In his head, he asks himself these kinds of questions:

“Is she going to be cool with me when I go out with friends over the weekend?” Or will she call me every 15 minutes to find out where I am? “
” Man, I hope she does not think my collection of games is odd. “
” Is it going to work if I’m vegan and loves rare steaks? “
” She will not freak out if I have to stay at work until late at night once a week I hope? “
” She said she was “not looking for something serious” … how to change your mind ?? “

He will try to answer all these questions by “playing” with you and seeing what other aspects of your personality appear. But more importantly, he lives to have the title of the One who “got you”.

From time to time, you can make him think about it by validating his feelings and giving him affection. But don’t overdo it and don’t choke it with your attention all the time. Let THE chasing you most of the time.

# 5. Have your life outside of your relationship.

Do what you want and spend time on other parts of your life that you are happy and satisfied with.

It reminds him that sometimes you’re a bit out of reach, and that’s how it should be. He will run after you with passion and find ways to win your heart over and over again

There are still other cases where a man is not as “there” as you would like. And as cute as it is, you want to slap it on the head to be as silly. You might even feel a little disarmed. It goes away even after you’ve done everything you can and have tried everything. 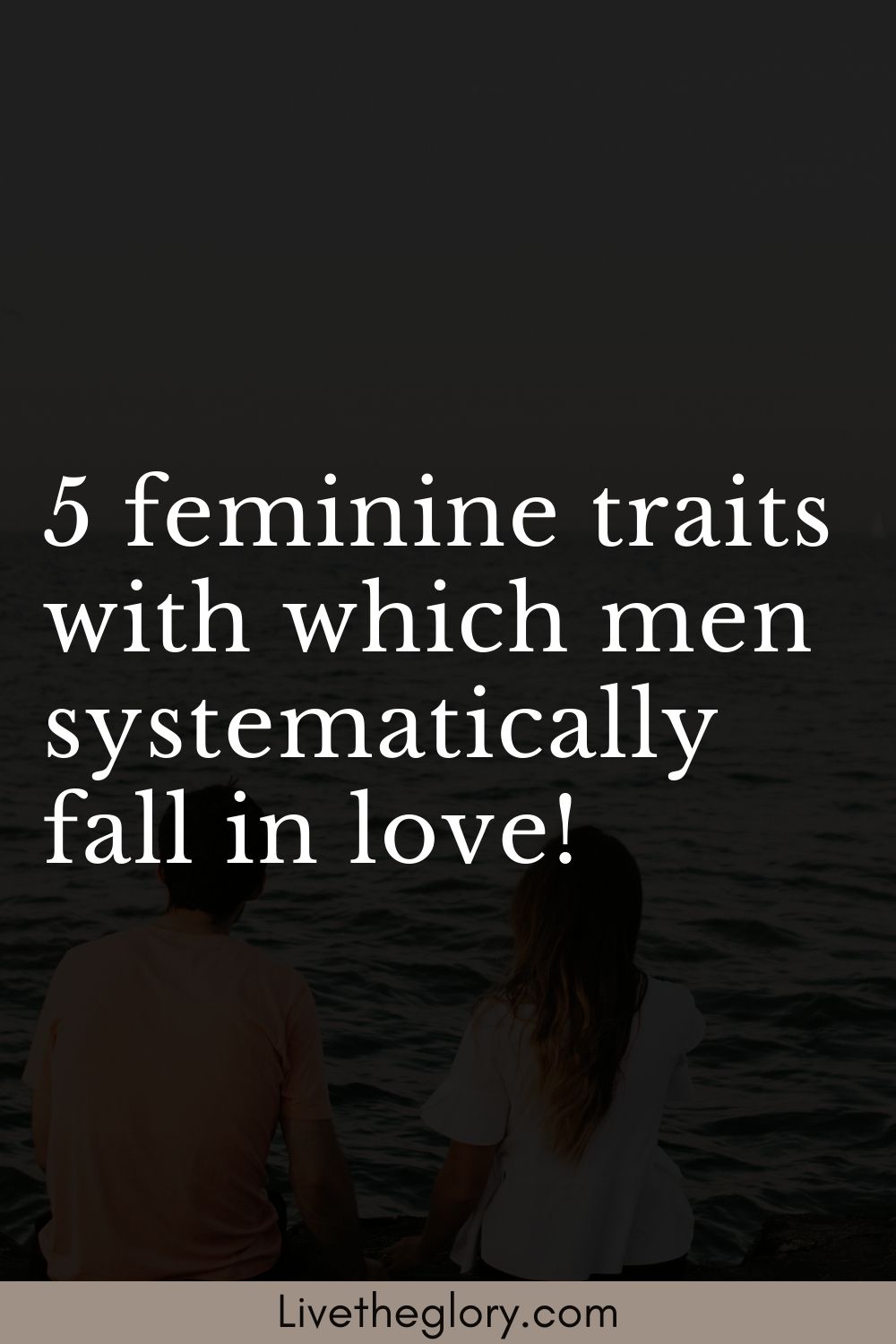