4 BRUTALLY BLUNT REASONS WHY HE TAKES YOU FOR GRANTED

Being taken for granted is one of the most humiliating and painful things one can experience. It is particularly difficult if your companion treats you this way.

This is exactly the situation you are in right now.

Deep down, you know that your boyfriend or your husband is convinced that there is nothing he can do that would make you stop loving him.

You see that he takes advantage of your good heart. You see that he appreciates your presence just because he likes having someone who loves him so much.

And you know very well that you are at the bottom of his priority list.

However, why does this happen in the first place? How can someone know that the other person is an ideal victim for this kind of behavior?

To be more concrete, why does your boyfriend take you for granted? Why is he using you when it’s the last thing a girl like you deserves?

The first reason why someone could treat you like they do is actually quite simple.

You allow him to behave so and he doesn’t even realize his actions.

And your boyfriend is probably no exception. Even if I don’t pretend it’s all your fault (after all, he’s the one who hurts you emotionally without thinking about the consequences), maybe it’s time to think about it and ask yourself if it’s you who allowed him to do so.

Let things be clear. If a guy is an asshole, he will probably try to hide his bad personality traits at first and start to reveal them over time.

It means your boyfriend hasn’t been a bastard from the start. No, it gradually became so, with small things at the start that got bigger over time. And that’s why he got away with it every time.

After a while, he realized that you were giving him the green light for his behavior.

He noticed that he doesn’t need to thank you for anything and that you will always be there for him, so he has continued to take you more and more for granted.

2. He doesn’t care about you

I hate being the one who’s going to burst your little bubble, but here’s the hardest and truest truth: if a guy takes you for granted he probably does it because he doesn’t care about you.

At least not enough to think about your emotions and be careful not to break your heart.

He may love you enough to spend time with you, but he doesn’t care if he will hurt you emotionally.

He doesn’t care if you feel underrated or hurt. This guy is obviously a selfish moron who thinks only of his own needs and could never put you first, despite everything you’ve done for him.

Remember one thing: if a man treats you like he doesn’t care, you better start believing it really is.

Besides, what better proof than his indifference?

And yes, it exists, we can be too nice, too nice or too loving.

You are a girl who gives herself entirely to the man who will never be able to reciprocate, and that is exactly why you seem to be taken for granted.

You are giving yourself too much and you are trying too hard for someone who does not deserve it.

In addition, you never get angry. Even when you notice his misdeeds, you easily forgive him and he knows he will always get away with it.

So why should he bother to change his habits?

Therefore, the man you are with is not afraid of losing you. He knows that you will stay, despite what he can do, because you convinced him of your love and showed him your feelings.

It is therefore easier for him to stay put and appreciate the attention he receives from you than to continue to conquer you.

If you are taken for granted, your biggest problem is probably that you cannot say ‘ no ‘.

You have a hard time setting boundaries and people, including your boyfriend, take advantage of them.

You are someone who is always available and ready to do whatever it takes to please the person you love.

You are always there when he needs a service, a shoulder to cry or companionship, when in his eyes, you are far from being his priority.

To be simple, you are a pro when it comes to giving second chances and accepting false excuses.

Even when deep inside you know that this person will never change and does not deserve a place in your life, you are still going against your own principles. 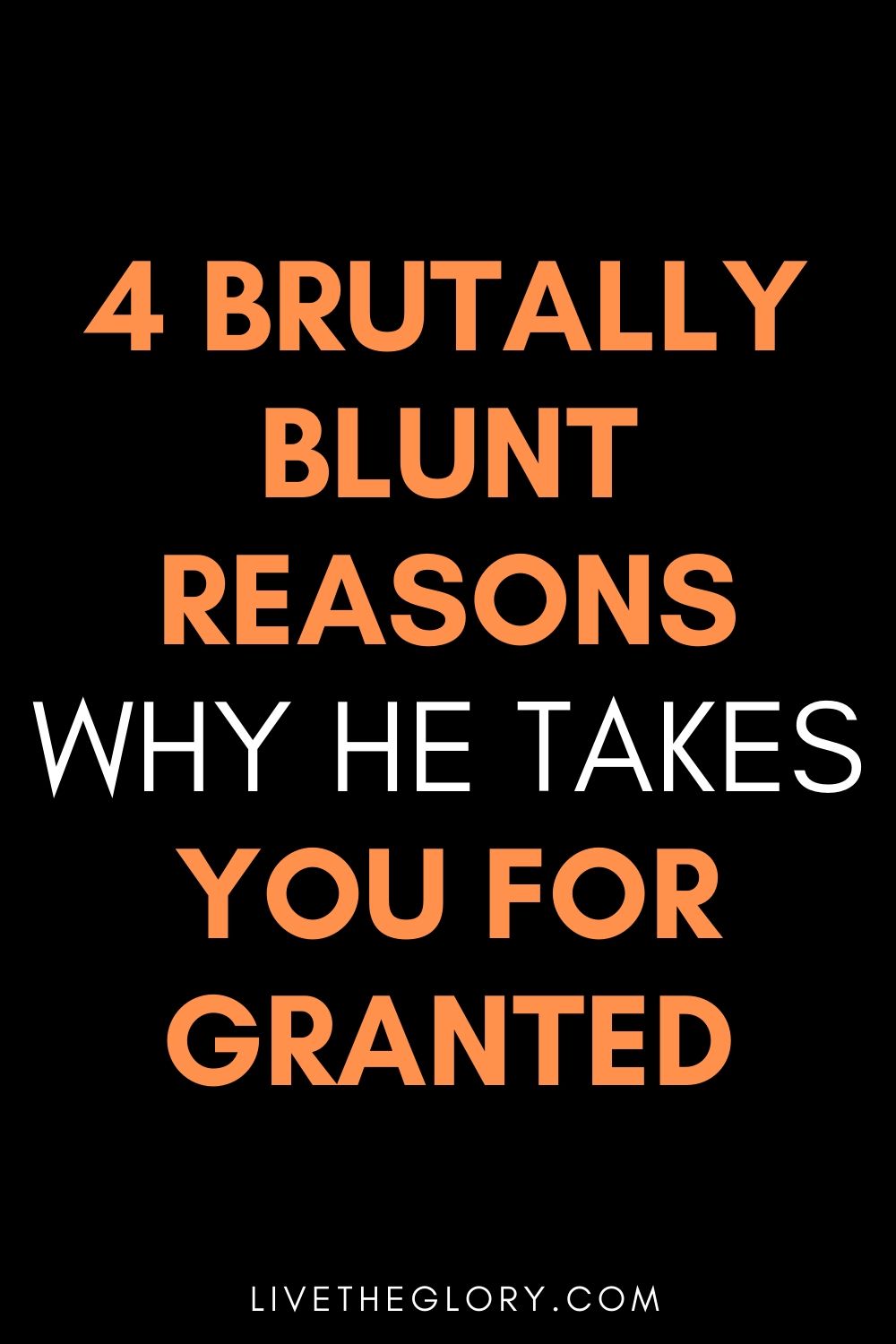