In our hyper-connected world, people tend to say words that don’t really matter.

On social networks, in particular, many people often post publications that are not very valuable. They are superficial (like videos of cats or memes), tell empty platitudes, or throw words in the air.

And when it comes to relationships, people often say things they don’t necessarily think. A man can tell you that he loves you, but his actions don’t really match his words. Or he might, in fact, be falling in love with you, but can’t find the words to say it.

Why is it so difficult to read the signs sent to us by men?

Why can’t they just stop sending contradictory messages and be honest with what they really feel?

You’ve probably had s**x with men before, so you know what I’m talking about. And I can perfectly understand that you feel a little bored by the men who do not seem to manage to find their way and to be honest with their feelings.

Let me help you and give you the TRUE signs that a man is super serious about you – and that it is worth the wait.

First, here is a warning

Ok, today you will learn to differentiate between a man who loves you and a relationship that is not worth it…

… But let me warn you first quickly.

You see, women are always talking about contradictory signals when they try to understand what they represent to a Potential Someone.

But this is what I always tell them: “There is NOTHING ” contradictory “in the signals that men send”.

Everything he does and does not do is a clear indication of what is really going on in his head. And often his words don’t carry as much weight as his ACTS.

When the connection is there, and you already know you’re crazy about each other, saying these three words is just the icing on the cake. It’s wonderful to hear him say that he loves you, yes, but that will only confirm what your HEART has known for a long time.

You will certainly say to me: “Do you think I am clairvoyant? “

“Don’t you expect me to open up to him completely and know that before he even opens his mouth?” “

I understand you. And that’s why it’s time to give you the top 10 signs that prove he’s crazy about you:

1. will give you clues

Calm down, you don’t have to be Sherlock Holmes to unravel the mysteries of his heart. Most men will not tell you in the face how they feel (surprise, surprise), but it is not because they are trying to play with your feelings.

Rather, it is because many men are not good at expressing their emotions.

I know a lot of men who have a hard time with this. They were brought up to think that opening up and talking about this kind of thing is not very useful (or manly) quality. And unfortunately, that’s what makes it difficult for them to talk about something as complicated as their feelings…

So confessing their LOVE for you is EVEN MORE DIFFICULT.

Anyway, it’s not that complicated to decode what his cryptic statements really mean. You just need to ask yourself some important questions, and the answer will reveal itself soon enough:

“When he talks to me, does he make me feel important to him?” “ (Ie” Hey, I found this vintage 80s box from ‘Blondine in the land of the rainbow’ that you were looking for … it was on this collector’s blog. send the link… you owe me a coffee! ”)

“Is he suggesting that only ME interests him?” “ (Ie of” Working in an office can be so boring … especially with all those noisy girls in the marketing department, still taped to their Instagram pages. This box would have needed someone cool like you! ” )

He is certainly trying to hide it with humor, or false nonchalance. But if you perceive that unbreakable spark of affection hiding behind it, he is certainly not about to put you in his friendzone.

Yes, the eyes are the mirror of the soul! But do not take it too literally to the point of measuring the diameter of its pupils. It would be weird…

Instead, think about how he looks at you. Is he fascinated by your simple presence? His eyes should be telling you, “You’re too good to be real … and yet, you’re there. “

Men are visual beings, as they say. If he likes what he sees, it will be hard not to look at you.

3. He has NO excuses

A man in love will not let his work or anything he has going keep him from seeing you. Even if he is overwhelmed, he will always find time for you. He won’t give you heated excuses like “we’re all overworked at work”, or “I’m pretty busy right now”.

A man in love is like that: he will move mountains to make room for you in his program, and it shows. And even if he is very busy, he will always find time to keep you posted on how it is going for him.

4. He stays TRUE with you

… Not what you want to hear, but what you MUST hear.

When a man really loves you, he understands what makes you react. He KNOWS BOTH your qualities and your faults … and WHEN EVEN thinks that you are the best person he has ever met.

And if he sees that you’re not doing the best you can, he won’t be afraid to tell you. But he won’t be condescending or mean. It is more likely to tease you, pinch your cheeks, and give you “a hard time,” rather than making you feel bad.

5. His time is YOUR time

Like I said before, it’s a good sign if it makes you feel important. He also has to get out of his habits and do things with you.

It goes further than making room in your calendar to see you. The important word here is “together”. If he tries to link STRONGER through ROUTINE regular, you should realize.

Maybe he takes the initiative to set up weekly activities, like having coffee at his favorite weekend spot, or taking you to his boxing club meeting, to see if you’d like it.

He is going from “single-mode” to: “I think I want something serious with this girl”.

6. It makes you completely comfortable

When you don’t know where you stand with someone, the way they act and talk to you can intimidate you. You can’t put your finger on it, but you know it’s fragile.

Not with him. Everything he says and does shows that he will go nowhere. There is nothing ambiguous about it, and in particular, what it makes you feel. Whether it’s the words he chooses (as indirect as they may be), his body language, or the general impression he gives off …

… You know he wants you on board.

7. He knows that everything is not around him

We all tend to be a bit self-absorbed from time to time, and that’s okay. But, if a man likes you, you can see how much he wants to join you on a lot of things.

For example, he won’t insist on going out to eat at this new Asian seafood restaurant that has received good reviews on Yelp if you don’t feel like it. And even if Greek cuisine is not too his style, he will want to eat there, because your preferences are important to him.

He’s like that. He knows that relationships require compromise, and that’s why your opinion counts as much as his.

But you want someone who is naturally in tune with your inner state, and who knows when something is wrong. Even if you don’t say anything, he knows when and how to act.

He’ll ask you if you want something when he goes to get coffee, offers to take you to work before you go shopping, or maybe even rearrange your DVD collection in alphabetical order.

Whatever it is, he works overtime to make sure everything is fine in your world. When a man is in love, he LOVES to know that he can take care of you as he can.

9. Details are important to him

During his research, he discovered that the strongest couples made an effort to know the inner worlds of the other. He calls it having a ” love card,” that is, having detailed knowledge of what is going on in your partner.

And it’s easy to tell when a man is trying to create his love card for you, whether you’ve known him for years, or have met him recently.

According to Gottman, if he cares enough about you to know the “little” things, it’s an indicator of a healthy relationship. This includes, for example, your favorite restaurant, your biggest rival at work, your idea of ​​the perfect job, your biggest dream, your best friends, etc.

When you talk to him about these things, he naturally retains these little details and keeps them for future reference. He does this because he knows that is what makes you wonderful and unique.

Is your man tenacious? Is he the type not to give up when he hits an obstacle? Would you even say that he is a bit stubborn?

It’s easy to sweep it away by saying that it’s part of his male identity, but it may just go further than you thought.

This quality could also be a promising sign, if it is reflected in the way it interacts with you and in your relationship.

You could have problems due to your past, or your ex; your differences with your man might start to surface, or maybe he is having problems himself while he is trying to hang out with you.

These challenges are an integral part of any relationship. So, if that does not disconcert him – and if he wants to sink through – you must not let go!

If your man has MOST of these criteria (six or more), you may well be able to seriously consider a future with him, because he is probably thinking of you IN THIS WAY.

There is also the possibility that you may not see any signs. There may be times when there seems to be a glimmer of hope, but very tenuous. Most of the time, it is cold at best with you. If so, do NOT give up now!

Some men need a little more incentive and encouragement than others. If your gut tells you there’s a connection between you and Mr. Opaque – and you’re afraid he’s going to GO for good – it might be time to close the deal before he leave forever. 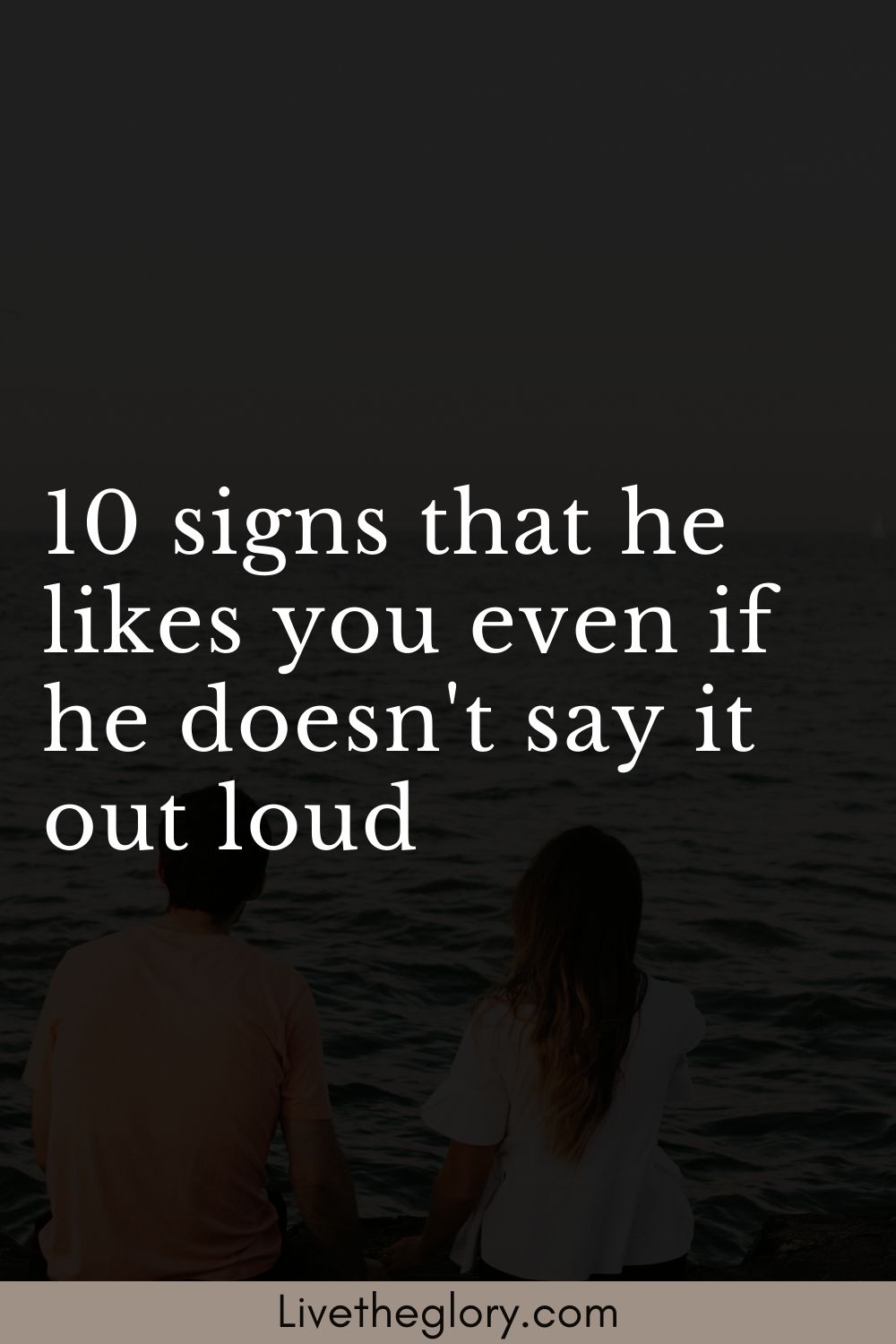